In the cold open, Mr. Ernst is checking for loose floor boards and roof tiles.

Lucy comes by. Mr. Ernst is making a list of things that need repairs, and he wants Lucy to make a list, too. 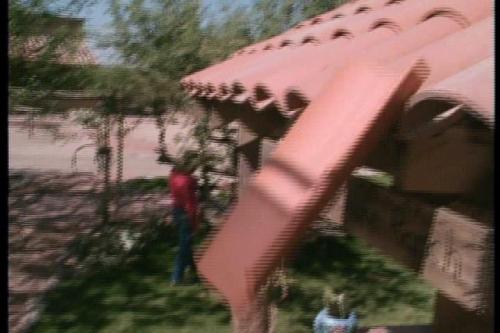 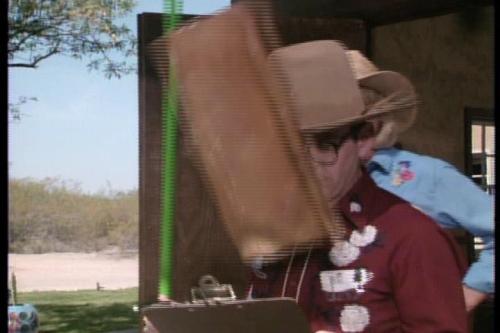 After the credits, Mr. Ernst is going over what needs and doesn’t need repairs with Danny and Ted. 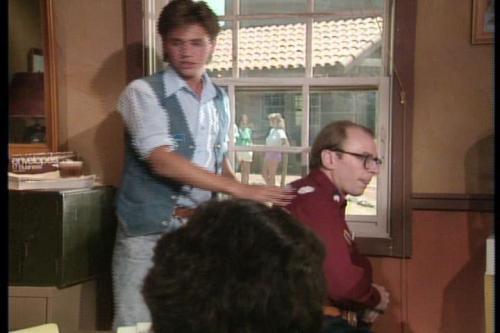 Unfortunately, Ted is distracted by a girl in a green tank top outside and excuses himself. Danny covers for him by telling Mr. Ernst that Ted promised the girl that he’d teach her “about cactus”. Mr. Ernst suggests, the next time that Danny gives a nature talk, Ted could give a guest lecture “on cacti”. Danny humorously agrees. Ted comes rushing back in. It wasn’t the girl that he thought it was. Ted starts to apologize, but Mr. Ernst brings up Danny’s explanation. He also launches into a safety talk that, surely, is not foreshadowing of any kind.

We do learn some things in this scene. The tack room, where the bridles are kept, is mentioned. Also, Mr. Ernst calls Ted “Theodore”. Unless he’s joking, this might be Ted’s real first name.

There’s also a bit of bad editing where one of Mr. Ernst’s lines starts before he opens his mouth (just before the shot changes).

Outside, Danny gets to work on the loose shingles, but Ted is distracted over a guest named Charlene (last name seemingly pronounced “Haymer”), which frustrates Danny. Apparently, the ranch has a dining room. Danny goes over three of Ted’s previous guest crushes: Heather, Jennifer, and Tiffany (blonde hair, very small bikini). The point is Ted develops crushes on seemingly every cute girl that visits the ranch. What a horndog.

Danny wants Ted to steady the ladder, but Ted thinks he sees Charlene and walks off, and…

I call bullshit. Ted was not doing anything vital. The only reason that the ladder fell backward was because Danny turned around and yelled after Ted. 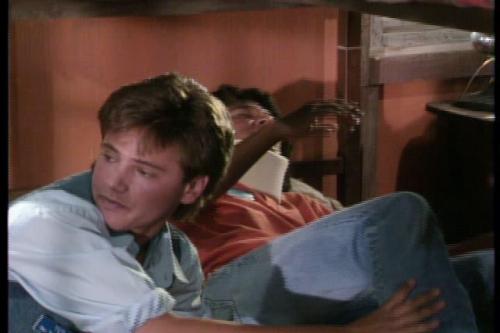 Danny and Ted return from the doctor. Danny will be better in two days to a week at most. Despite Danny not wanting special treatment and wanting to get up and work, Ted gets Danny into Ted’s bunk.

Melody, Brad, Buddy, and Cassie come in to see how Danny’s doing. Despite Danny clearly getting up to meet them, Melody blames Ted for Danny being on his feet, and Ted’s all “WTF?”. There’s a recurring gag where Ted and Brad both inadvertently cause Danny neck pain. 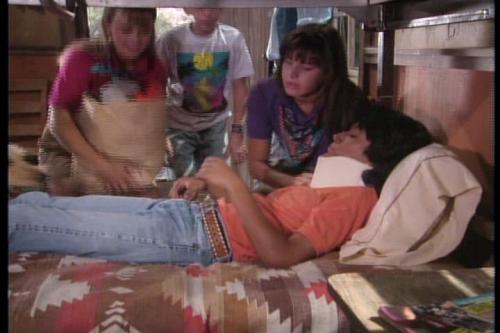 Melody lets Danny borrow her cassette player and a mix of her and Brad’s tapes. Both girls like Bon Jovi. 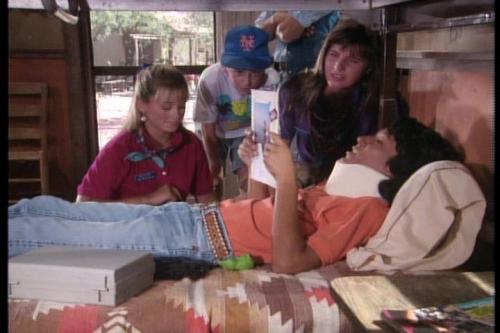 Magazines from Lucy and Mr. Ernst include “International Feed Catalog” and “Math Puzzles for the Really, Really Smart”. 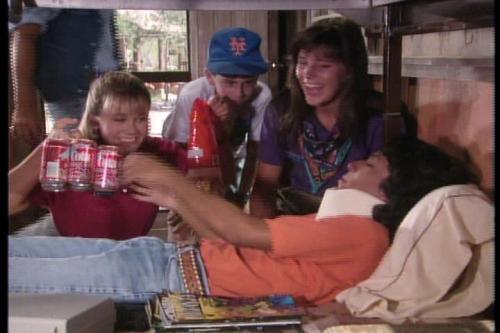 Brad asks Danny how he’s feeling. He says he’s okay, but he also appears to be in pain, so they leave. Danny groans more, and Brad gives Ted a mean look. Ted has his second “WTF?” reaction of the scene. 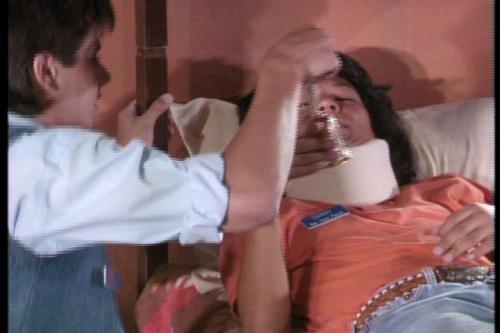 Ted gives Danny a bell to summon him for “anything” at “anytime”. Danny says he doesn’t need Ted’s help, but then he seems to be in pain again. Ted insists. After a bit of time-killing banter, they actually rehearse using it. When Ted leaves, Danny promptly abuses the bell by intentionally dropping his magazine on the floor and summoning Ted to pick it up. 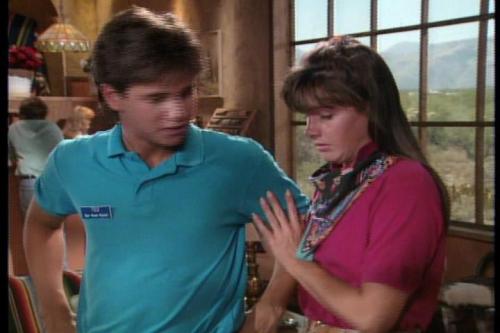 Two days later, Ted and Brad bring boxes with animals into the main lodge. Brad is afraid of snakes (callback to episode 05). The two snakes are Gertrude and Ernsteen (not sure on the spelling). Brad is surprised when Ted admits he’s afraid of snakes. Ted says Indiana Jones is afraid of snakes. Brad asks why he told Mr. Ernst that he’d give Danny’s nature talk. Ted says it was his fault that Danny got hurt. Brad agrees. Really, Ted didn’t do anything to directly cause Danny’s injury. He had lightly been holding onto the ladder with one hand and walked off. Sure, if he hadn’t walked off, Danny wouldn’t have turned around and shifted his weight, but to what extent can Ted be held responsible for that?

Apparently, Danny’s handwriting is horrible, and Ted can barely read his notes. 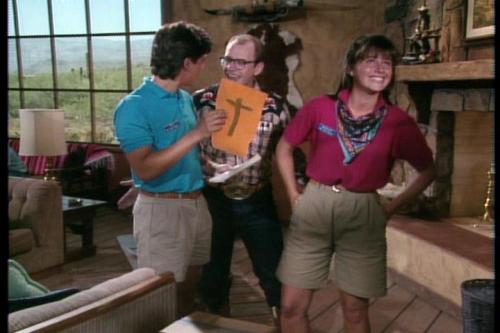 Mr. Ernst brings Ted a drawing of a cactus to use as a visual aid during his lecture. I love Brad’s reaction. You can tell Kelly Brown is on the verge of cracking up. 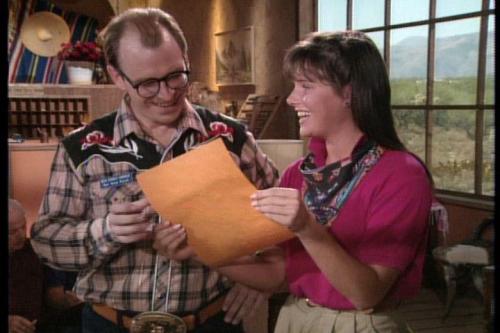 Ted declines the use of the drawing, but Brad makes Mr. Ernst feel better by saying the drawing would look great hanging in his office.

Ted can’t read Danny’s notes, so he half-asses the lecture.

We do learn there are no turtles in Arizona.

Apparently, there’s some nasty animal that Ted is too scared to even take out of its box.

Ernsteen is the poisonous snake, and Ted decides to not take her out of her box, since “they must look exactly alike”. I doubt it. Wait, why does the ranch have a poisonous snake? And does Danny regularly handle it during his nature talks? Wouldn’t that be dangerous? 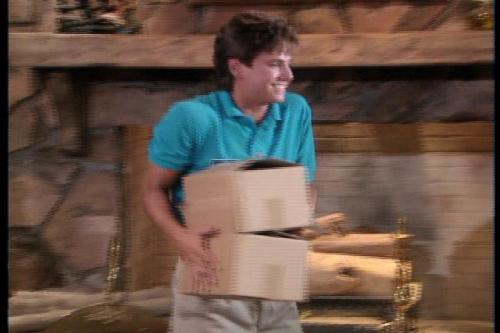 So, after talking for about 75 seconds, Ted leaves – without the snake boxes.

Later, Ted is inexplicably wearing different clothes (yes, it’s the same day). Mr. Ernst, Buddy, and Cassie had come to say hi to Danny. He seems to be a little better. Mr. Ernst asks how Ted’s nature talk went. Danny rings for Ted (he dropped his doggy toy). Lucy arrives to see Ted. Danny rings again (he dropped his bell); pretty funny, but Ted should have realized at this point that Danny was dicking with him. Gertrude is loose in the main lodge and scaring the guests. Ted rushes off.

Danny rings the bell and is upset when Ted doesn’t immediately come running, so he gets up to select something to read.

After the commercial break, Danny tries to downplay it, but Buddy wants to run off to tell Ted. After a bit of banter, Danny gets Buddy to keep his secret until he decides to tell Ted himself. After a bit of discussion regarding Buddy’s inability to keep secrets, Buddy leaves.

Later, Brad is cleaning in the main lodge. Melody arrives. She had to play go-between for Ted and Charlene. Ted was too busy doing Danny’s work to see her.

Charlene gave Melody a letter for Ted, which, after some half-assed ethical debate between Melody and Brad (Christine Taylor garbles “lately” as “lakely”), Melody reads aloud. Charlene’s gone back to Cincinnati and hopes to get together with Ted next year. I’m so glad that this “subplot” between Ted and a girl that we never see got some kind of resolution.

Brad reaches into the bucket for the glass cleaner and… 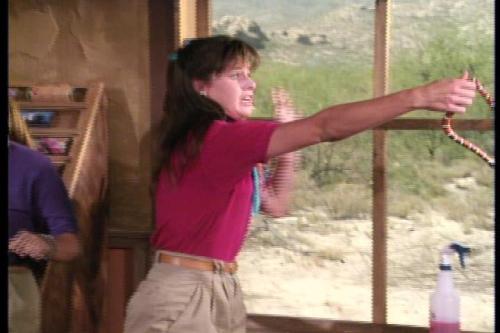 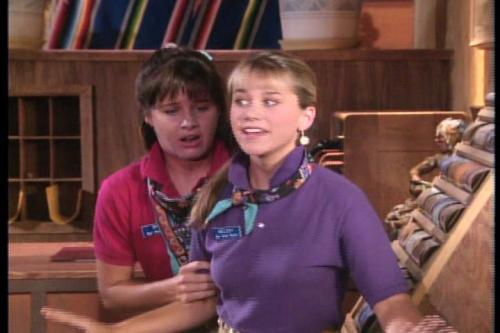 Brad scares Gertrude off and refuses to help Melody find her, opting to get Ted to do it instead. 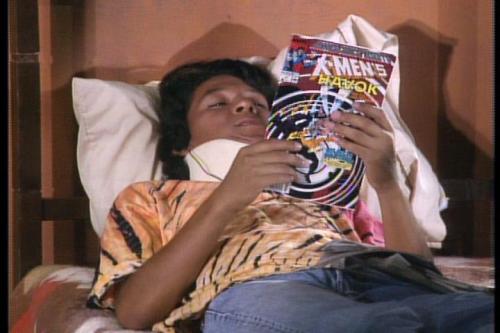 Does anyone know which comic that Danny’s reading? I tried searching for it with no luck.

Anyway, Danny gets Ted to sing him to sleep, and Ted offers up a sick twist on “Rock-a-bye Baby”.

Brad and Melody arrive, overhear it, and have a good laugh. Ted and the girls go to get the snake.

In the main lodge, they “look” for Gertrude (Melody’s the only one not scared). 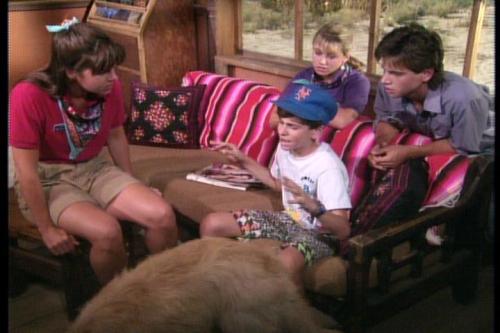 Buddy and Cassie come in, and it isn’t long before Buddy nervously talks himself into spilling everything.

Later, Danny’s kicking back and enjoying himself.

Buddy, Cassie, Melody, and Brad come in – supposedly all injured (except Cassie) – and crowd in on Danny. Danny rings for Ted. 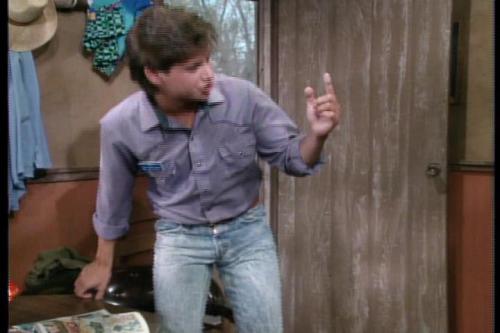 Ted comes in, supposedly with a snakebite and unable to tell which snake bit him. Danny gets up to rush Ted to the E.R., and…

Melody, Brad, Cassie, and (reluctantly) Buddy leave, so Ted and Danny can have their “boy talk”.

Buddy apologizes to Danny and makes claims of torture and whipping. I’m all for seeing Melody and Brad whipping people. Get on it, DeviantArt.

The guys talk, and “understanding” music comes on. All is well. 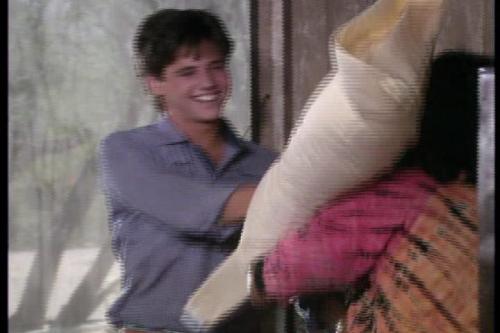 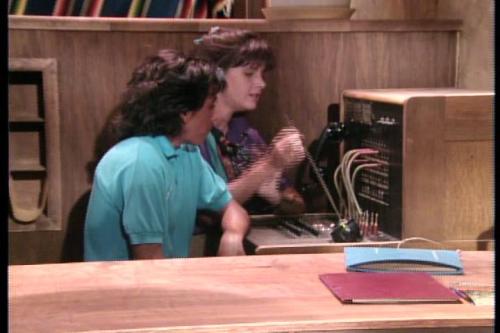 The pre-credits scene at the end involves Brad showing Danny how to use the phone system (light work, I guess). Mr. Ernst is happy that everybody’s well and working.

Brad freaks the fuck out when Gertrude taps her foot. Ted follows her. Mr. Ernst walks away (I guess to find something to trap the snake). 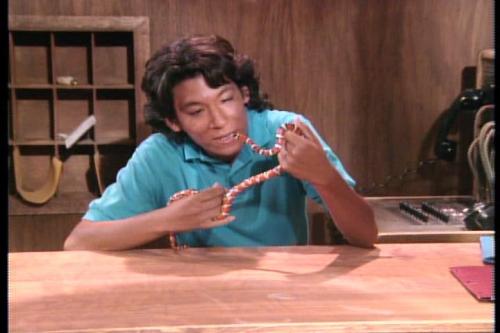 Danny calmly picks up Gertrude, having missed her, and tells her what happened here.

So ends another day at the Bar None.

This episode was okay, but Danny was an ass, freeloading and letting everyone worry over him just to teach Ted a lesson, even though Ted wasn’t really at fault. Ted left the snakes in the main lodge for no logical reason; it was only to create the snake subplot.

Tune in next Wednesday for the review of season 1.

This entry was posted in season1 and tagged season1. Bookmark the permalink.